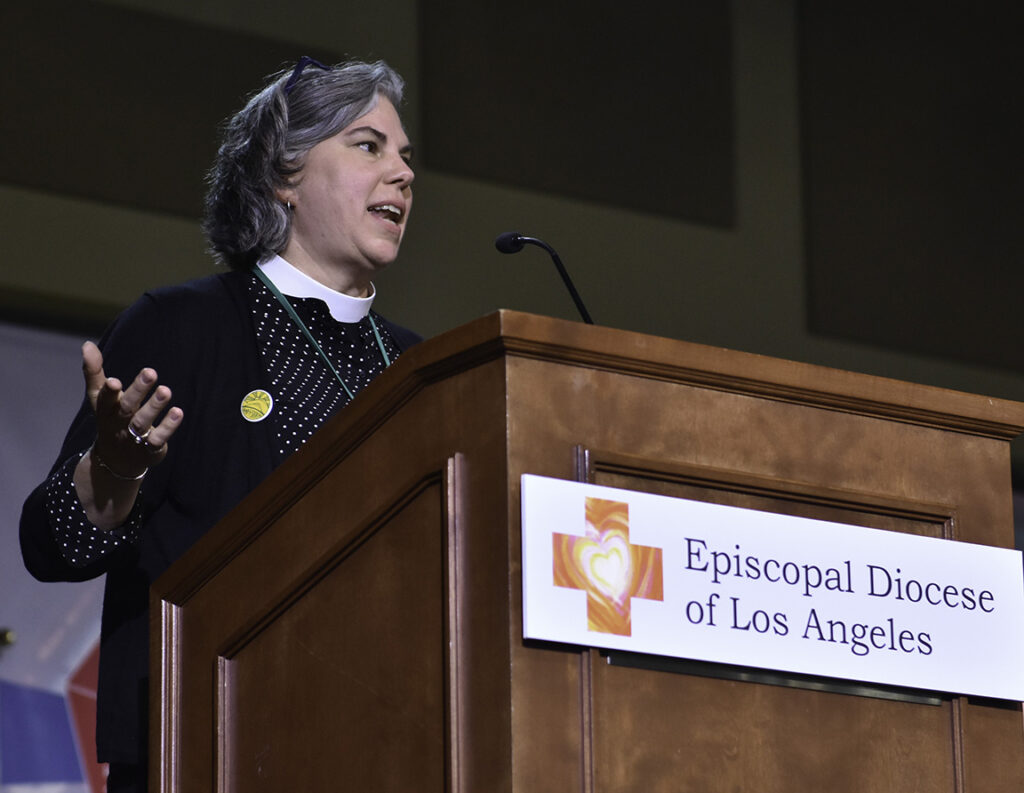 There are no average days, and she likes it that way.

“That’s just the nature of my life and I enjoy the variety of it,” says McCarthy, 49, a former vicar of the Church of the Epiphany in Oak Park and three-time deputy to General Convention. She spoke to The Episcopal News on a recent “day off” while tending to Tule, an 11-month-old border collie she recently acquired who is recovering from a canine disorder. 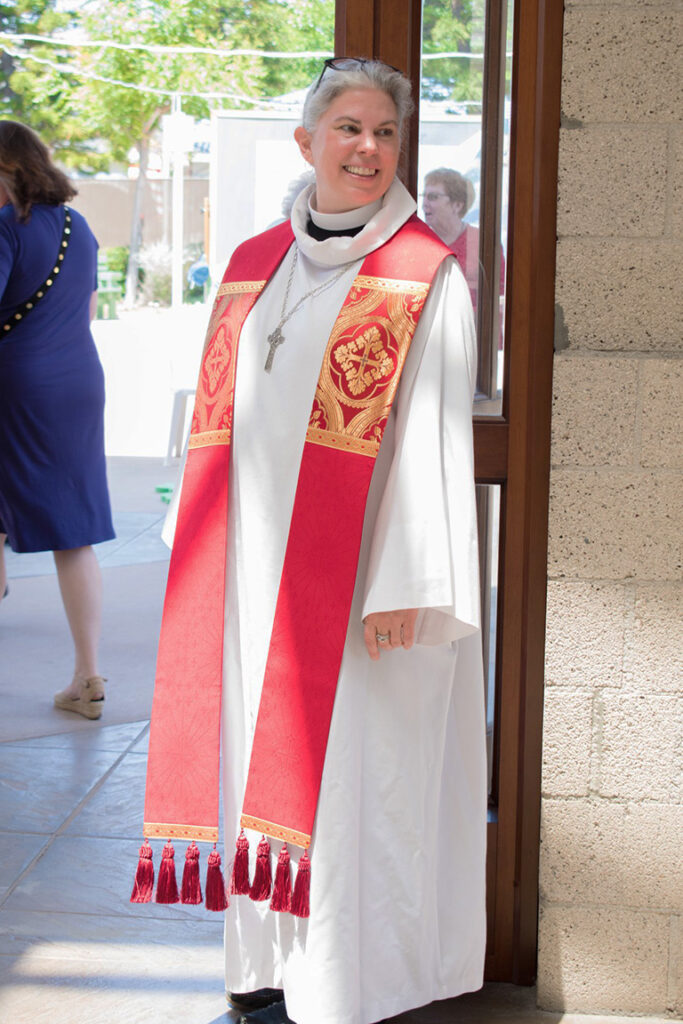 Her diocesan role, she said, is very similar to “the old joke about parish priests handling everything from fixing the toilet to dealing with the budget to sitting at the bedside of someone who’s dying – but instead on an institutional rather than an individual level.”

Her operating principles include putting people first; collaborative leadership, and joyfulness – all included in what Bishop Diocesan John Harvey Taylor calls her “McCarthyisms – not the negative political kind – but her bedrock belief, which she leans into each moment of her ministry, that the people of God can accomplish virtually anything if they do the best they can and remain in loving relationship with one another.”

McCarthy “deftly balances many hats, especially chief of staff of St. Paul’s Commons, vital leadership in formation and transition ministry, and as Bishop Bruce’s and my indispensable counselor on matters too numerous to mention,” he said.

Bishop Suffragan Diane M. Jardine Bruce agreed. “From the first moment I met Melissa, I knew that she was not only a talented and creative follower of Jesus, but that she also was a deeply spiritual and caring pastor.

“I loved doing visitations at Epiphany when she was vicar there – well organized, creative, loving – a great combination,” Bruce said. “Her many gifts and skills have come into full use when she stepped into the role of canon to the ordinary. Her clarity of thought, her openness and willingness to listen deeply, her responsiveness and her ability to understand – and ask questions – has made her such a valuable asset to the diocese. Personally, I consider her a good friend and confidant, and look forward to continuing this important relationship even after (God willing) I move into my new role in the Diocese of West Missouri.”

Bruce is poised to become West Missouri’s provisional bishop in December, if approved by a Nov. 6 convention vote. 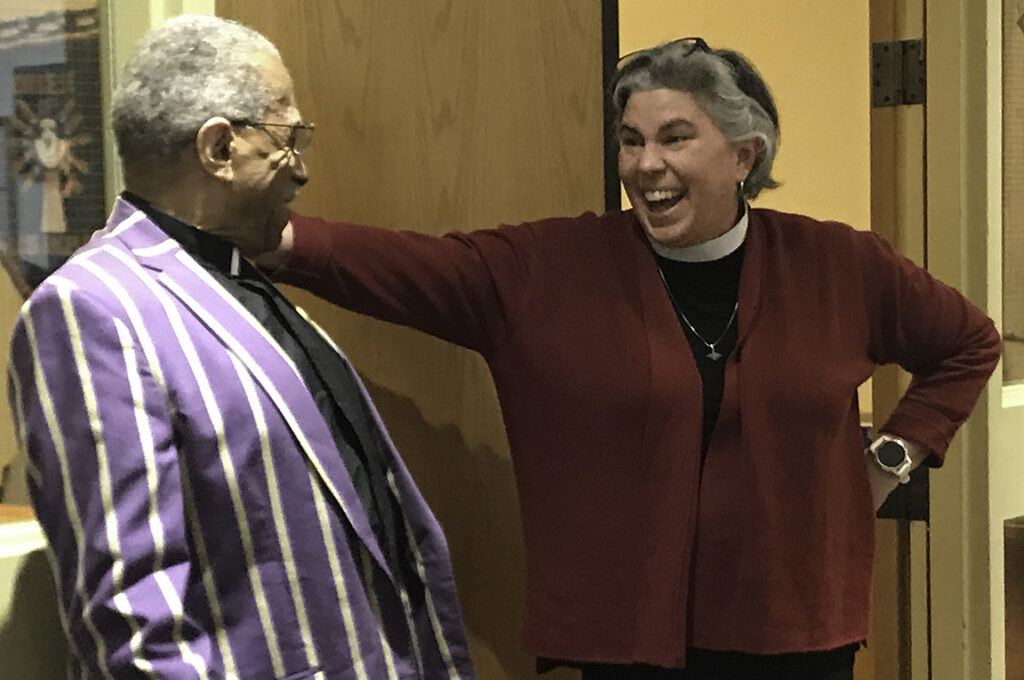 McCarthy shares a laugh with Warner Traynham during an event at St. Paul’s Commons in January 2020. Photo: Janet Kawamoto

McCarthy grew up in Bakersfield in California’s Central Valley, loving and eventually teaching ballet and modern dance. The daughter of a steel construction company owner and granddaughter of Methodist and Presbyterian medical missionaries, she balked initially at early suggestions she might also be called to pastor.

Her love of dance introduced her to The Episcopal Church. Her dance troupe regularly met at St. George’s while she was an undergraduate at the University of California at Riverside.

Drawn to the church’s inclusivity and liturgy, and buoyed by the warm welcome she received, she immersed herself in pastoral care, administrative work, leadership development, and planning and executing liturgies, and realized over time, “that I had been transformed slowly; liturgy by liturgy, prayer by prayer. Aside from presiding at the altar, I was doing much of what a priest does,” she recalled.

After earning a bachelor’s degree in religious studies at UC Riverside she attended Bloy House and the Claremont School of Theology, eventually earning a master’s of divinity in June 2005 from Church Divinity School of the Pacific. She was ordained a priest January 14, 2006, by then-Bishop Diocesan J. Jon Bruno and Presiding Bishop Frank Griswold, who was visiting the diocese.

Prior to her appointment as canon to the ordinary, McCarthy served as priest associate at St. Mark’s Church in Berkeley, and from 2006 to 2017 held a variety of roles at Church of the Epiphany in Oak Park, including priest associate, priest-in-charge, and vicar.

She has also served as president of the Standing Committee, and other diocesan posts. 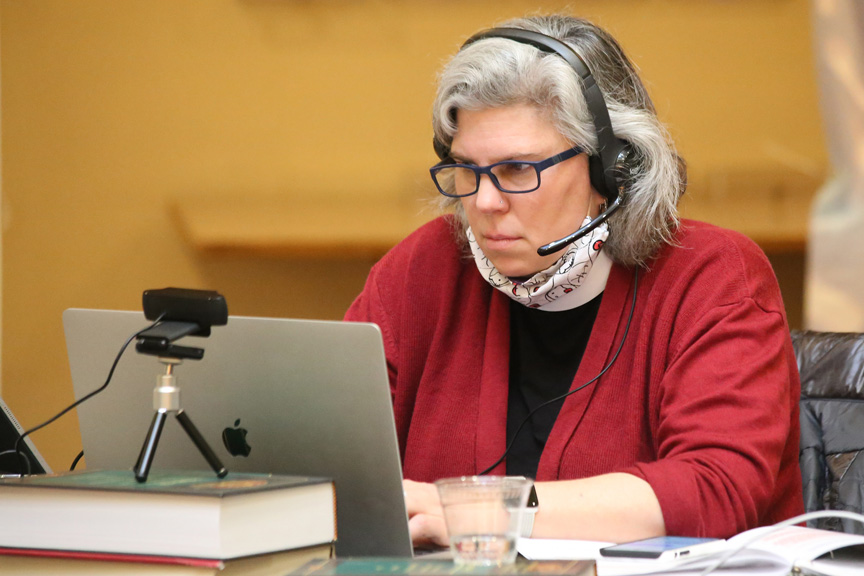 Canon to the Ordinary Melissa McCarthy oversees all aspects of the 2020 Diocesan Convention both online and at St. Paul’s Commons. Photo: Janet Kawamoto

The Rev. Antonio Gallardo, vicar of St. Luke’s Church in La Crescenta, said McCarthy has been a steady guide as the Corporation of the Diocese reimagines a future, more collaborative role. “At our retreat last week, Melissa demonstrated an understanding of church canons that few around the circle had,” he told The Episcopal News via email. “She made her points with clarity, humility, and openness to work together.  She also organized the entire retreat.”

In conversations about the 2022 draft budget, “Melissa has provided information on staff’s workload, capabilities, and morale … a level of detail that I don’t think anyone around the table has,” Gallardo said. “She is a fair advocate for staff and clergy, with full authority and openness (something granted by Bishop Taylor).  Bishop Taylor has told us that dealing with Melissa is like dealing with him, and that has proven to be correct.”

McCarthy has a soft spot in her heart for clergy and the people of the diocese, Gallardo added. “As a mission vicar I know that Melissa is always there available if I need her, just a text message away. Sometime last year there was a situation at my mission that I needed to share and to get some insights from Melissa. I felt heard, and l left feeling supported and with tools to implement. She is an advocate that speaks on our behalf with authority, because she has been there.”

Diocesan vice-chancellor Jeff Baker recalled McCarthy welcoming his family to Epiphany from another faith tradition about seven years ago. “We were uncertain and somewhat wounded in our spiritual journey, and she was a wise, generous pastor and guide to us. She welcomed us without condition and said that we should let the church carry us for a while, instead of feeling like we had the weight of the world on us. They were magic, loving words that gave us a home and allowed us to rebuild for the work and ministry to come.” 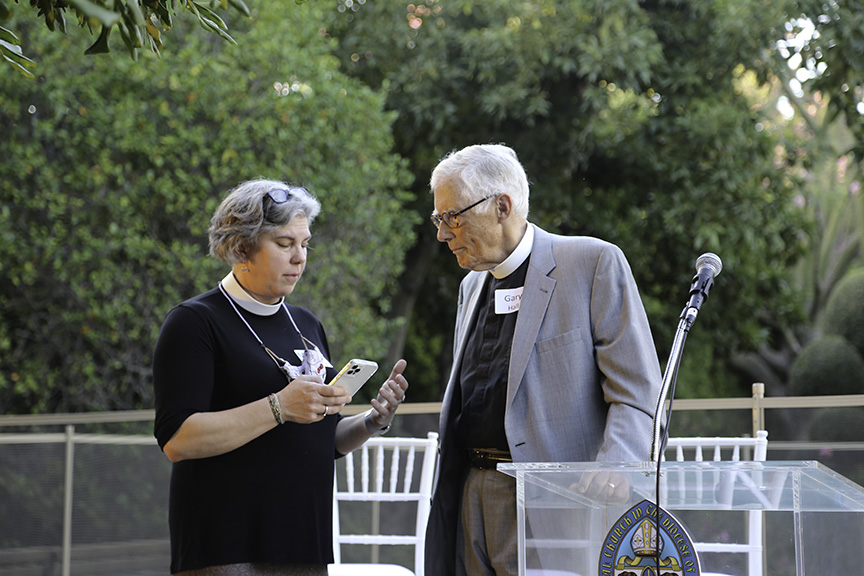 McCarthy consults with Gary Hall, dean of Bloy House, before a recent event at the episcopal residence. Photo: Janet Kawamoto

Now, as vice-chancellor, his work overlaps often when McCarthy and Taylor ask for legal advice, counsel and advocacy. “I see her now as a colleague, client, and friend,” Baker said. “In this I bear witness to her energy, wisdom, and ceaseless work for the church and our communities. She addresses conflict and hard questions with calm deliberation, benevolent assumptions, pastoral care, and disciplined love.”

The Rev. Jeff Thornberg, rector of Church of Our Saviour in San Gabriel, recalled arriving in the Southland from the Diocese of East Carolina, facing numerous complex issues and “not knowing anybody, not knowing protocols in a system that’s really complicated. But Melissa has done an amazing, gracious job of walking alongside me and my vestry, trying to parse together what has happened, what is happening and what we need to be doing together as our context changes so quickly.”

The role of clergy is often isolating and challenging, and McCarthy offered support with accountability, he said. “If you ask for her help, she’s going to ask questions. She’s going to hold you accountable in a very healthy way and that has helped me as rector [to] hold my system accountable.”

McCarthy also organized hybrid in-person and online ordinations at St Paul’s Commons, keeping the diocese connected, and engineered departmental reorganizations and creation of a new finance team, including the Rev. Susan Stanton as finance director and the appointment of Canon Abigail Urquidi as canon for Congregational Support. 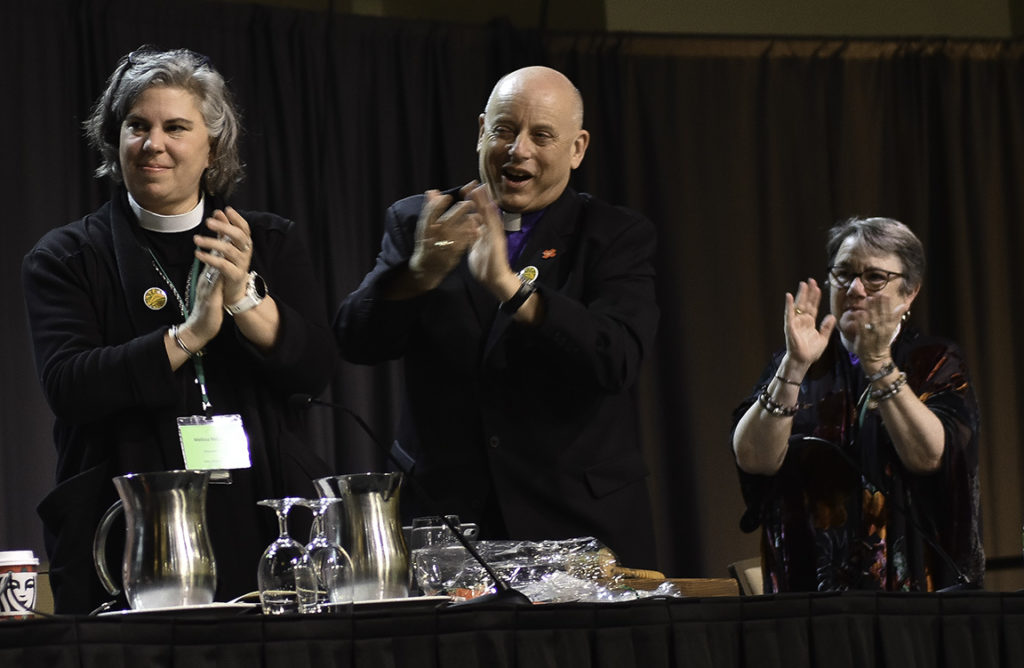 “She juggles so much at any given time and still finds a way to interact with me and the other diocesan staff,” Urquidi said of McCarthy. “She is someone who loves God, loves the Episcopal Church and genuinely loves her diocesan staff/family. Her role as Canon to the Ordinary/Chief of Staff is extremely important because she functions as the support system for her staff and anything and everything that involves the aspect of administration and organization.”

McCarthy’s plans “always got us through” especially during the pandemic,” Urquidi added. “No matter how hard and tough it gets, she has a plan! She makes you feel like it’s all going to be okay. From providing [online] morning and evening prayers daily to keep us all connected, all the way to learning how to Zoom. She really dedicated her ‘plans’ as a task to help keep us connected and together as a diocese and as a diocesan family, especially during the most difficult times of this pandemic. We are so blessed and extremely grateful to have her.”

The Rev. Norma Guerra, who will observe her one-year anniversary as diocesan associate for vocations on Dec. 1, said McCarthy facilitated her transition in the role and served as the go-to person for COVID creativity and resilience.

“She was amazing in helping me understand a lot of things that happen, and that need to be done in the case of ordinations in COVID time,” Guerra said. “Because of COVID, we had to be more creative, and resourceful and think about the things we normally do in a different way. If I ever had a question, she was the person to go to. She has this amazing mind that organizes everything so clearly.”

McCarthy oversees the Transitions and Vocations department, and along with Taylor, joins the Commission on Ministry and the Standing Committee during prospective clergy interviews and subsequent deliberations. The two are “very in-sync,” she said. 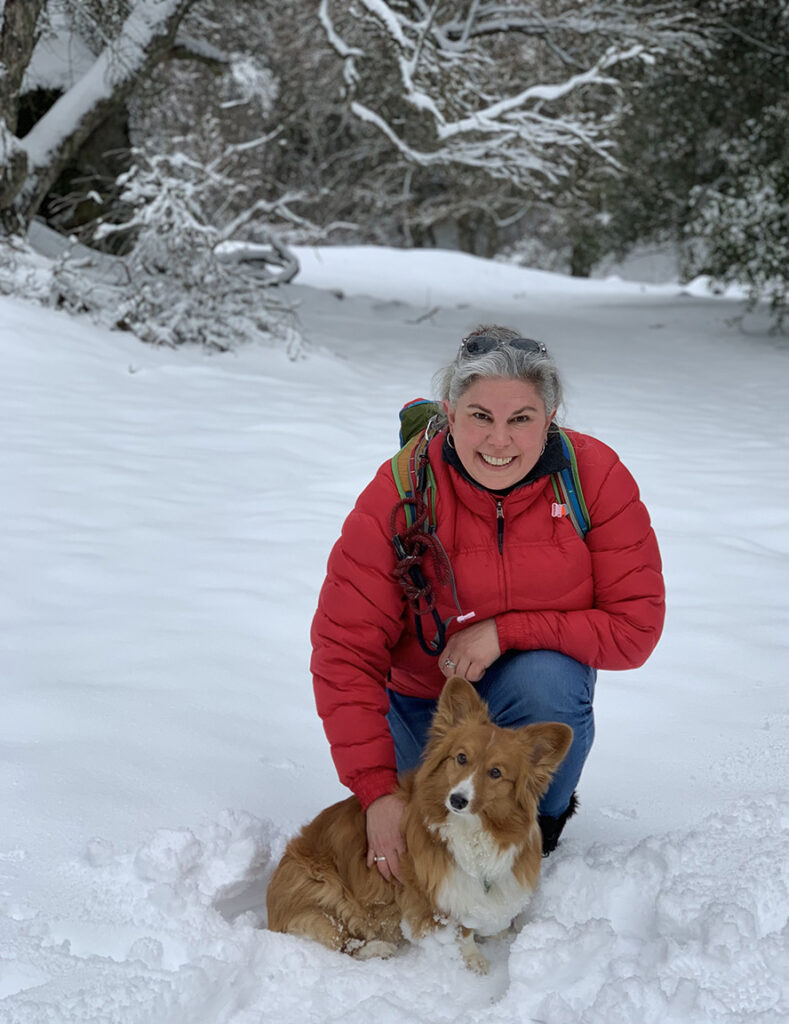 McCarthy pauses during a walk in the snow with her corgi, Crackers. Courtesy photo

“It’s a once or twice in a lifetime opportunity, to work with somebody you love and respect and have friendship with,” McCarthy said of Taylor. “We had this with Bishop Bruce, too. Going forward, it will just be John and me. He’s amazing, a wonderful, wonderful bishop. I get to see him at work every day, and how he handles things, cares for people, pastors, responds to crises, problem-solves and he is an inspiring servant leader.

“There is tough stuff that he does not enjoy,” she added. “I can see how hard that is on him. He’s a person of integrity and he is 110% for the diocese. He loves Jesus, and he loves people, and that comes across in everything he does.”

Taylor believes McCarthy is on the fast track to becoming a bishop. “One day, all too soon, Melissa will be sporting a miter,” he said.

“We’ve been fast friends ever since our time as vicars at opposite ends of the diocese,” he added. “I’ve long admired her ability to bring an end to a meandering conversation or debate with a brisk, well-discerned insight that sets every head at the table or on the Zoom screen to nodding.” 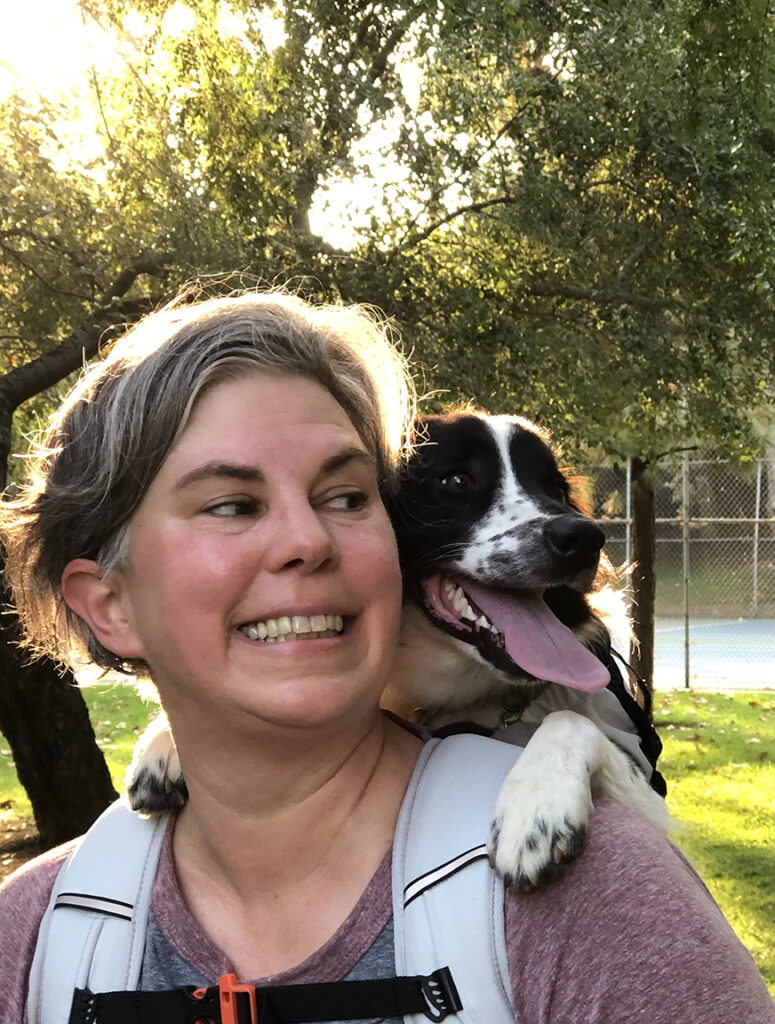 McCarthy considers herself a constant learner striving for light-heartedness. “I love our churches. I love the people of the diocese, and the diocesan staff. It’s amazing. It’s been a real gift, and an honor and quite humbling to do this work. And, if we really believe what we preach, there’s no reason for us not to have such joy in what we’re doing. So, that’s what I strive toward.”

She also loves “playing the guitar, which I have not done much in the last couple years, but I got to get back into that. I love animals, and particularly my dogs. So, this new puppy I’m training, hopefully, working toward getting her certified as a therapy dog so she can do hospital visits. And the outdoors. I can’t get enough of being outside.”